La La Land is a romantic musical comedy written and directed by Damien Chazelle. The Movie was filmed entirely in Los Angeles and its surroundings. Chazelle has been sitting on this movie for a number of years as he was having trouble finding a studio to run with the movie as nobody was willing to invest their finances into his vision. 7 Golden globes later and most certainly a host of awards to follow including the very strong possibility of Oscar success, there will be a lot of studio’s kicking themselves over missing out on what is sure to be a massive box office success. 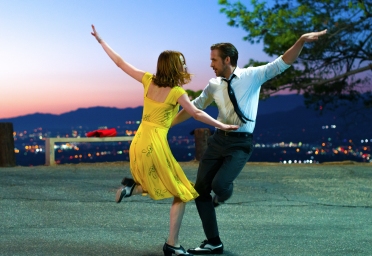 The movies follows the story of Sebastian who is a struggling Jazz musician and Mia who herself is struggling to find her way in the acting world. Both meet each other in a low point in their lives when they are discouraged about their futures in there much loved chosen fields. Sebastian has just lost his job playing jazz in a music bar and Mia has just been turned down for yet another acting audition. These events lead to the two setting out together on a journey of self-discovery, compromise and of course romance which follows them over many years as they chase there hopes and dreams.

The feel good factor is definitely set very high on this one with credit going to its main two characters Sebastian and Mia played by Ryan Gosling and Emma Stone. Their on screen chemistry is electric on the big screen. There are a lot of unknown musical numbers in here that you wont of heard of before. This was one of the main  reasons for the initial struggles Chazelle had with the studios for funding but the song choices were beautifully written and performed and will definitely not be unknown for much longer.

Pride and Prejudice and Zombies in Movies@Gorey

A zombie outbreak has fallen upon the land in Jane Austen’s classic tale of the tangled relationships between lovers from different social classes in 19th century England. Feisty heroine Elizabeth Bennet (Lily James) is a master of martial arts and weaponry and the handsome Mr. Darcy (Sam Reilly) is a fierce zombie killer, yet the epitome of upper class prejudice. As the zombie outbreak intensifies, they must swallow their pride and join forces on the blood-soaked battlefield.

How to be Single in Movies@Gorey

New York City is full of lonely hearts seeking the right match, and what Alice, Robin, Lucy, Meg, Tom and David all have in common is the need to learn how to be single in a world filled with ever-evolving definitions of love.

Based upon Marvel Comics’ most unconventional anti-hero, DEADPOOL tells the origin story of former Special Forces operative turned mercenary Wade Wilson, who after being subjected to a rogue experiment that leaves him with accelerated healing powers, adopts the alter ego Deadpool. Armed with his new abilities and a dark, twisted sense of humor, Deadpool hunts down the man who nearly destroyed his life.

Ben Stiller returns both in front of and behind the camera for Zoolander 2, a comedy that finds the beloved model Derek Zoolander (Stiller) and his rival-turned-partner Hansel (Owen Wilson) facing a threat to their continued success.

Set in 1944 as the Second World War reaches its climax, the Allies are poised to invade France and finally defeat the German army. But in Walmington-on-Sea morale amongst the Home Guard, led by Captain Mainwaring, is low. So their new mission, to patrol the Dover army base, is a great chance to revive spirits and reputation – until glamorous journalist Rose Winters arrives to write about their exploits. MI5 then discover a radio signal sent direct to Berlin from Walmington-on-Sea, sparking rumours of a spy and – with the outcome of the war suddenly at stake – it falls to the veteran servicemen to step up.

Shakespeare’s glorious comedy of love and change comes to the National Theatre for the first time in over 30 years, with Rosalie Craig (London Road, Macbeth at MIF) as Rosalind. With her father the Duke banished and in exile, Rosalind and her cousin Celia leave their lives in the court behind them and journey into the Forest of Arden. There, released from convention, Rosalind experiences the liberating rush of transformation. Disguising herself as a boy, she embraces a different way of living and falls spectacularly in love.

Upset about moving from a big city to a small town, teenager Zach Cooper (Dylan Minnette) finds a silver lining when he meets the beautiful girl, Hannah (Odeya Rush), living right next door. But every silver lining has a cloud, and Zach’s comes when he learns that Hannah has a mysterious dad who is revealed to be R. L. Stine (Jack Black), the author of the bestselling Goosebumps series. It turns out that there is a reason why Stine is so strange… he is a prisoner of his own imagination – the monsters that his books made famous are real, and Stine protects his readers by keeping them locked up in their books. When Zach unintentionally unleashes the monsters from their manuscripts and they begin to terrorize the town, it’s suddenly up to Stine, Zach, and Hannah to get all of them back in the books where they belong. Note: Scholastic has sold over 400 million Goosebumps books worldwide in 32 languages since the series introduction in 1992, earning critical acclaim and dominating global best seller lists. R.L. Stine has been recognized as one of the bestselling children’s authors in history.

Jason Kelly is one week away from marrying his boss’s uber-controlling daughter, putting him on the fast track for a partnership at the law firm. However, when the straight-laced Jason is tricked into driving his foul-mouthed grandfather, Dick, to Daytona for spring break, his pending nuptials are suddenly in jeopardy. Between riotous frat parties, bar fights, and an epic night of karaoke, Dick is on a quest to live his life to the fullest and bring Jason along for the ride. Ultimately, on the wildest journey of their lives, “dirty” Grandpa and his uptight grandson discover they can learn from one another and form the bond they never had.