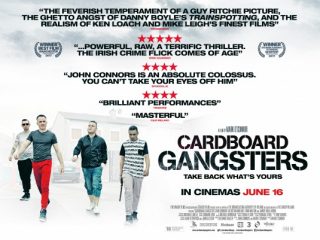 Cardboard Gangster is an Irish crime Movie based in Darndale, Dublin. The Movie has a largely Irish cast with the most well-known being John Connor who people well certainly remember from Love/Hate. It does seem like John Connor maybe getting a bit stereotyped in this type of role but nobody will complain because very few can do it better. Set in Darndale in the north side of Dublin city the movie follows the exploits of Jason Connolly (John Connor) and his gang who have grown tired of dealing in small time drug dealing. They decide to try and enter the big time by taking over the drugs sales in Darndale. Standing in there way is Derra and his gang who have ruled Darndales’s drug seen for many years with Jason affair with his wife adding fuel to an already volatile situation.

Cardboard Gangster can be funny at different stages of the movie even though it’s not really supposed to be, there is also a lot of violence in the movies which may not be liked by everybody that will go to see the Movie. John Connor just seems to be getting better and better every time we see him on the big or small screen. Early indication suggest Cardboard Gangster will do well on its Irish release and that will be totally deserved as the Movie was very well written and the acting was impressive all round. The Movie also had recent success at the Manchester film festival which is sure to add to the movies appeal internationally.