The global phenomenon known simply as TED – a thriving movement propelled by ideas that are transforming the world – is coming to cinemas worldwide. The general public will have the previously unthinkable opportunity to experience the “opening night” of TED’s legendary annual conference, alongside its equally legendary VIP audience. Hosted by TED’s curator Chris Anderson, the approximately 120-minute theatrical screening of this event will debut the first evening of TED 2016: Dream (live directly from Vancouver, Canada from February 15- 22), featuring world-renowned thinkers, artists and storytellers who will share their “ideas worth spreading” about the greatest dreams we are capable of dreaming. What emerges is a spirit of wonder and optimism that represents the world at its best. 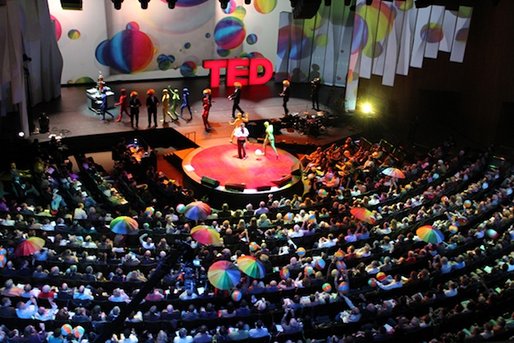 While TED holds specific details in confidentiality until shortly prior to the event each year, we expect a dramatic musical act will set the event in motion before Chris Anderson takes the stage with opening remarks, which build a thrilling sense of anticipation and conclude with his hallmark declaration: “It’s time for TED!” At that point, TED will premiere its inventive 2016 “opening titles” video – typically produced by a world-class design house renowned for creating the dazzling motion graphics in blockbuster Hollywood films. And from there, the heart of the program begins with a succession of extraordinary speakers – drawn from artists, inventors, adventurers, global leaders, and visionaries – who will deliver the “talk” of their lives in the world-famous TED 18-minute format. Impromptu on-stage interviews and imaginative short films will be interspersed throughout the program, which typically concludes with a second spectacular artistic performance. For the cinema-going audience, watching “opening night” at TED’16 will be a one-of-a-kind opportunity to join in the experience with the 1,200 attendees in Vancouver – the world’s leading thinkers and doers who have won every international prize of excellence from Nobel Laureates, to Pulitzer Prize authors, to Oscar winners.