The Importance of Being Earnest (Live) in Movies@Gorey 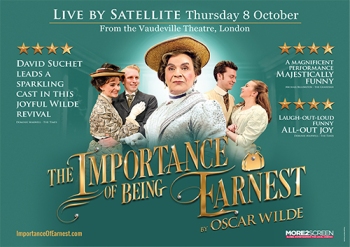 Oscar Wilde’s much-loved classic play, The Importance Of Being Earnest, will be broadcast LIVE from London’s Vaudeville Theatre on Thursday 8 October 2015, with additional backstage footage and cast interviews exclusive to the cinema event. Having just opened to critical acclaim with 4 star reviews from The Guardian, The Times, The Evening Standard, Daily Mail, The Independent and The Stage, the new production stars one of Britain’s best-known stage, screen and television actors, David Suchet (familiar to millions of TV viewers as the detective Hercule Poirot), who plays the role of the formidable Lady Bracknell. David Suchet says: ‘I’m delighted that one of the finest plays in the English language will be broadcast live across the UK and Ireland on 8th October, entertaining theatre lovers and Oscar Wilde fans from Inverness to Ilfracombe and almost everywhere in between! We’re having tremendous fun with the play and look forward to sharing this with cinema audiences too.’

With its high farce and witty dialogue The Importance of Being Earnest is Oscar Wilde’s mostenduringly popular play and fizzes with wit as he delights in debunking social pretensions. Two bachelor friends, aristocratic dandy Algernon Moncrieff and the most reliable John Worthing J.P., lead double lives to court the attentions of the desirable Gwendolyn Fairfax and Cecily Cardew. The gallants must then grapple with the uproarious consequences of their ruse, and with the formidable Lady Bracknell. 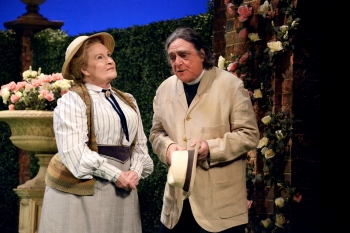 Following a six week UK tour, The Importance Of Being Earnest opened at the Vaudeville Theatre on 1 July, and is directed by the multi-award winning Adrian Noble, a former Artistic Director of the RSC whose extensive theatre credits range from Chitty Chitty Bang Bang at the Palladium to Who’s Afraid of Virginia Woolf for the Theatre Royal, Bath and a myriad of acclaimed productions in between. The play also stars Emily Barber (Billy Liar, Cornelius, The Hired Man, Fiddler on the Roof and Orpheus & Eurydice), Michael Benz (Downton Abbey, Mike and Angelo, Little Lord Fauntleroy, Twelfth Night, Hamlet, As You Like It), Philip Cumbus (A Touch Of Frost, My Hero, Hope and Glory and Our Brave Boys, ‘Tis Pity She’s a Whore, The Macbeth, Much Ado about Nothing), Imogen Doel (The Get Out, Gastronauts, Primetime, Collaboration, In the Vale of Health, Serpent’s Tooth), Michele Dotrice (Betty in Some Mothers Do Ave ‘Em, Captain Jack, The Witches, And Soon The Darkness and Jane Eyre, When We Are Married, Richard III) and Richard O’Callaghan (Carry On Loving and Carry On at Your Convenience, Casualty, Red Dwarf, Dalziel and Pascoe).

“The Importance of Being Earnest”, October 8th    (From Jim Ryan)

Wilde, the most famous playwright of his day, wrote some of the greatest and most popular comedies in the English language. “The Importance of Being Earnest” is a perennial delight and, in a good production, provides unsurpassable entertainment.  He was born on October 16th, 1854 to Sir William and Lady Jane Francesca Wilde, his father a famous eye-specialist and his mother, who, as “Speranza”, wrote patriotic verse. The playwright, after an eventful and ultimately tragic life, died in Paris on November 30th, 1900.

It’s generally accepted that he was received into the Catholic Church on his deathbed. His mother, it seems expected the birth to produce a daughter, and when he turned out to be male, she attired him for many years in boy’s clothing – however, he drank mid-west American cowboys and miners “under the table” on his literary tours of that country. He was one of the greatest raconteurs of all time. His tomb, among the most visited in Pere Lachaise Cemetery in Paris, is one of the most famous in the world. The scandals surrounding his life are ‘small fry’ in today’s world and his plays are more popular than ever – our own Abbey and Gate Theatres have done much to keep his name alive.

I never tire of seeing this great play – indeed, it’s only a few weeks ago since I saw at The Smock Alley Theatre in Dublin in a superb production Directed by Kate Canning of Ballyduff Drama Group. The plot is excellent, the situations are sometimes hilarious (eg Jack Worthing mourning the death of the ‘brother’ who, next thing, comes on the stage in the pink of health), Cecily and Gwendolen going from sworn eternal friendship to lasting enmity and back in a short space of time, unforgettable characters (especially Lady Bracknell, played here by David Suchet) and witty, sparkling dialogue.

This critically-acclaimed production is not to be missed by those who love the theatre.