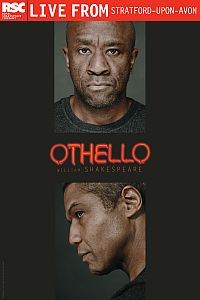 Othello is the greatest general of his age. A fearsome warrior, loving husband and revered defender of Venice against its enemies. But he is also an outsider whose victories have created enemies of his own, men driven by prejudice and jealousy to destroy him. As they plot in the shadows, Othello realises too late that the greatest danger lies not in the hatred of others, but his own fragile and destructive pride. After more than a decade working in film and television on projects from Star Wars to Holby City, Hugh Quarshie returns to the RSC to play Shakespeare’s Othello. He was last seen with us in Faust and Julius Caesar (1996). Hugh will play opposite Lucian Msamati in the role of Iago, returning to the RSC following his role as Pericles in 2006. The production is directed by Iqbal Khan (Much Ado About Nothing, 2012).

‘A stimulating interpretation, full of provocations and fresh compulsion’ ‘Joanna Vanderham’s Desdemona is tough, independent and sexy and Ayesha Dharker elegant and bitter as Emilia’

SHAKESPEARE’S ‘OTHELLO’ LIVE FROM THE RSC at MOVIES@GOREY WED AUG 26TH at 7PM. Recently, at Movies@Gorey, we saw “The Merchant of Venice” live from the RSC, Stratford-on-Avon; and it was superb in every way. So, I look forward eagerly to our next live screening from The Bard’s home town – ‘Othello’, on Wednesday, August 26th at 7 PM. Where better for a production of a Shakespeare play – each and every production from there has been superb. ‘Othello’, one of the world’s great plays, is fast-moving and memorable and has some of Shakespeare’s most magical poetry.

‘Othello’, is one of the four great tragedies of Shakespeare’s maturity (King Lear, Macbeth and Hamlet being the other three). Written in 1602/3, ‘Othello’ was first performed at the Banqueting House, Whitehall, London on November 1st, 1604 and “was many times acted at the Globe and at the Black-Friars”. The title role is one of the greatest and most demanding in the theatre, and there is no actor who would lightly pass up the part of the gifted but naive military commander. The role of the villainous Iago is also much sought after because he is the evil schemer in the play – one of the most malevolent personages in all literature! The other main character is Desdemona, one of the most admirable and most wronged of women. Her fate is almost unbearable in its poignancy. 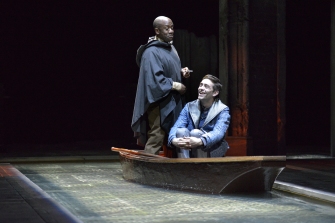 After Act 1, which is set in Venice, the rest of the play takes place in Cyprus. Othello, a victorious Venetian general, elopes with and marries Desdemona, daughter of Brabantio, a Senator, who is opposed to the marriage. Iago, foul-mouthed but seemingly honest, is jealous of the recent promotion of his rival, Cassio, and vows to bring about the latter’s downfall. And it is Iago’s deviousness in doing this that sets in train the tragic events of the play. 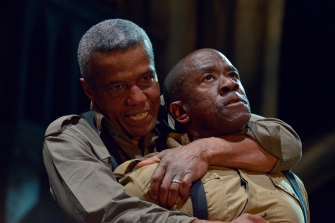 To discredit Cassio, Iago cunningly gets him drunk and Cassio behaves so badly that he is dismissed by Othello. Iago now contrives the situation where he advises Cassio that the best way back into his master’s favour is by getting the trusting Desdemona, to plead his cause. Meanwhile, Iago is planting in Othello’s mind the idea that she is being unfaithful with Cassio. He succeeds so well that Othello, who hitherto loved his wife so dearly, loses all self-control and becomes a raving, gibbering madman. Without a shred of justification, Iago poisons Othello’s mind against Desdemona and Cassio. How Iago will “enmesh them all” is the pitiless story of the rest of the play

If you love the theatre, this haunting and pitiful play, ‘Othello’, from the RSC is not to be missed.